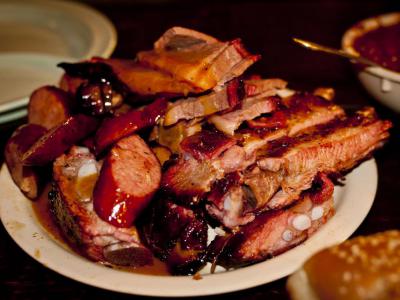 Cooper's Old Time Pit Bar-B-Que restaurant, honored to be the "Best Of The Best" in the barbecue business, known for its two-inch-thick pork "Big Chop" much as for being former US President George W. Bush's favorite barbecue joint, celebrated the history of Congress Avenue in the early 20th century by setting themselves up in a historic building on Congress.

Over the years, the 200 block of Congress has been the home to several pubs, saloons, cafes and restaurants. Now it has been brought back to life thanks to renovation. Back in the day, across the street was home to the International and Great Northern Rail Road Depot, built in 1888. And the upstairs space at 217 was once the Travis Hotel, rumored to have been a cat house!
Image by vxla on Flickr under Creative Commons License.