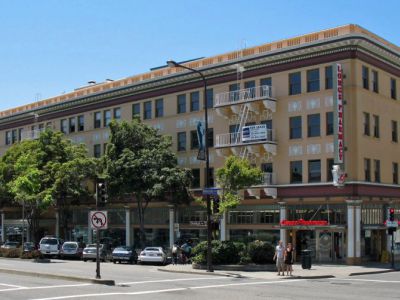 The Corder Building was built in the Classical Revival style in 1921. Designed by the well known Berkeley architect James W. Plachek, this warm sand colored structure with white columns and balconies is notable for its fine white adornments. The building's sheer size and elegance lend the neighborhood a heightened degree of urban dignity. Its presence filled in a previously empty block in the downtown area and was a major step forward in the development of the city's burgeoning business district.

Architect James Plachek played an important role in the development of downtown Berkeley in the late 1910s and 1920s. His work include the central branch of Berkeley Public Library, UC Theatre, and Alameda Courthouse. The Corder Building is listed in the National Register of Historic Places.
Image by Sanfranman59 on Wikimedia under Creative Commons License.