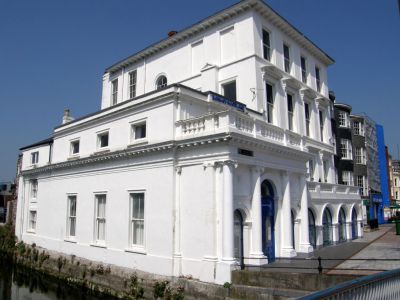 Located on the Grand Parade, the Cork City Club is one of the most beautiful buildings on the street. With its ornate architecture, the pure white structure stands on the south west corner of Grand Parade and adds to the beauty and grandeur to the street.

During the nineteenth century there was a growing popularity for Gentlemen’s clubs and the period saw the emergence of three of the kind in Cork.

In 1860 two clubs, namely the Daly’s and the grand parade club merged to form the Cork City Club. The previous structure underwent a serious renovation and the new building that presently stands as the Cork City Club took form under the leadership and design of Sir John Benson and Robert Walker.

Post 1952 the building was used by several other organization like the Legion in the diocese of Cork, the ICC bank and later the Bank of Scotland.

With its presence this immaculate structure, he Cork City Club truly is one of its kind the city of Cork.
Image by Cork City Libraries under Creative Commons License.