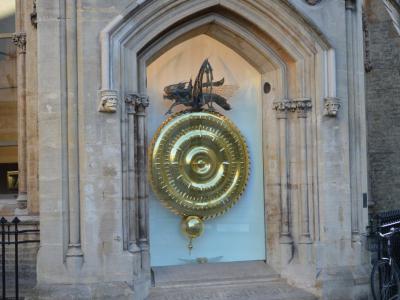 The Corpus Clock can be found in the Library Court at Corpus Christi College. The newest of three at the college, the court incorporates a former library building, redeveloped and extended to provide accommodation for students. The clock is Library Court’s centrepiece and was unveiled to the public in 2008 by Professor Stephen Hawking, himself a Cambridge University graduate.

The clock is a unique device, a fitting addition to the university campus renowned for invention throughout its history. Fitted with a rippled, 24-carat gold face, the clock displays time through three rings of LEDs, which depict hours, minutes and seconds. The face is topped by a large metal object, which resembles a grasshopper. This is an enlarged clock escarpment, which links the pendulum to the cogs inside the clock. It has been set on top of the clock face to resemble an insect that ‘eats’ time as the clock face rotates. It is even fitted with eyes that blink occasionally.

Perhaps the most remarkable feature of the Corpus Clock is the fact that it is only accurate once every five minutes. It has been set to randomly slow and accelerate, to give the appearance that the metal insect is indeed eating up time at will. The clock, one of Time Magazine’s greatest inventions of the 21st century, can be viewed within Corpus Christi’s grounds. Ask at the porter’s lodge for admission times and costs.

Tip:
Try to time your visit after dark and see the clock from across the road, when there's no traffic or significant pedestrian noise, as it is then at its best.
In the daytime, there are generally a number of tourists standing in the road taking photos, gathering particularly on the hour, so take care not to get run over.
Image Courtesy of Flickr and Matt Brown.