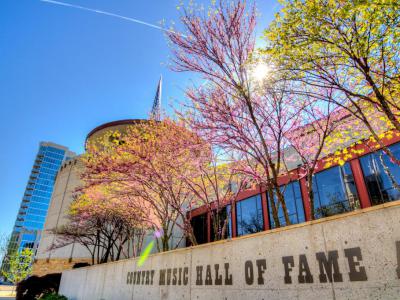 Country Music Hall of Fame and Museum, Nashville (must see)

The distinctive design is the first thing you will notice about this monument to country music. Vertical windows at the front and back of the building resemble piano keys; the sweeping arch on the right side of the building portrays a 1950s Cadillac fin; and from above, the building resembles a bass clef. The hall of fame was first established in the 1960s, and its first inductees were Jimmie Rodgers, Hank Williams, and Fred Rose. The original hall was located on Music Row, but in 2002 it moved to this signature building two blocks off Broadway. Country music fans are drawn by the carload to the hall of fame, where they can pay homage to country's greatest stars, as well as the lesser-known men and women who influenced the music. Those who aren't fans when they walk in generally leave with an appreciation of the genre's varied roots. The hall's slogan is "Honor Thy Music".

In addition to galleries, the museum has the 776-seat CMA Theater and the Taylor Swift Education Center, an interactive space upstairs where kids and parents can think creatively about songwriting and music making and, during scheduled programs, learn to play instruments (check schedules for dates and times). Other historic properties of the Country Music Hall of Fame and Museum include the letterpress operation Hatch Show Print (located inside the museum) and Historic RCA Studio B (located on Music Row), Nashville's oldest surviving recording studio, where recordings by Elvis Presley, Dolly Parton, Waylon Jennings, and many others were made.

Why You Should Visit:
Beautifully laid out for fans & non-fans of country music and situated in a great part of town close to live music, fun restaurants, the Bridgestone Arena & Broadway honky-tonks – just a lot of fun.

Tip:
Be sure to check the museum website for live music options. Also, consider getting the RCA Studio B tour combo ticket.