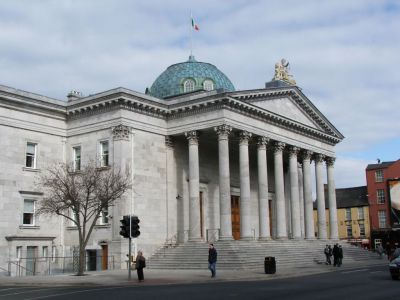 The city of Cork is filled with buildings that are of architectural brilliance and have history attached to it. One such building is the Courthouse of Cork. Standing majestically on Washington’s Street (previously known as the Great George Street), the Courthouse is one structure that can enthrall viewers by its sheer magnitude and presence.

The original building was designed by George Richard Pain and his brother James in 1836. However, the structure underwent serious damage after being exposed to the fire in 1891. Despite the damage done to the building, the portico stayed virtually untouched by the fire. After being engulfed in the fire, the present Courthouse stands in the place of the original Courthouse that was erected almost half a century prior.

At the entrance of the Courthouse, one is welcomed with 10 magnificent columns that handsomely carry the weight of the triangular pediment and the dome on the roof.

Since the Government decided to transfer responsibility of funding from the local authorities to the Department of Justice, the interiors of the building have undergone tremendous changes. As it is open to public, one can take a closer look at this beautiful structure not only from the outside but also tour the inside.
Image by Kglavin on Wikimedia under Creative Commons License.

Walking Down the Eastern Part of Cork Tour

The Eastern Part of Cork City is characterized by a mixture of old and new. Cork is the city that aims to evolve continuously while retaining its traditions. The upper side of of the city is a quiet sleeping area that wakes up only around the St. Patrick's Day. Walking down south you will notice the picture change to a more contemporary look. The suggested tour is to help you explore the East...  view more

The history of Cork is grand with great periods, ancient and present. This is reflected in the City's architecture and sites. One of Cork's originally preserved medieval sites is Red Abbey. This tour will take you to some of the City's greatest places, ancient and new.