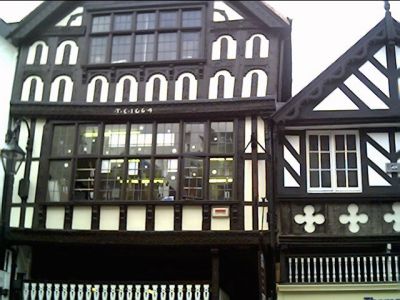 Cowper House is a former townhouse at 12 Bridge Street, and it incorporates a section of the Chester Rows. The property was built in 1664, following the destruction of many buildings in the city during the Civil War. The original owner, Thomas Cowper, was the mayor of Chester in 1641–42.

The house is constructed in sandstone, brick, and timber framing with plaster panels. Beneath it are two undercrofts: the front one (16m long) dating from 1350–75, or possibly earlier; and the rear undercroft (13m long) excavated considerably later, in 1839. More alterations to the building took place in the 19th-20th centuries.

Above the Row opening is a carved fascia. In the storey above is a window running almost the whole width of the building. Its frame projects from the wall and is carried on eight corbels. The window has 14 lights, is mullioned and transomed, and contains leaded lights. Below and on each side of the window are timber-framed panels.

The top storey is jettied. At its base is a bressummer carved centrally with "•T•C•1664" (the initials of Thomas Cowper), on each side of which are carved patterns. The top storey has a ten-light mullioned and transomed casement window containing leaded lights. Topping the structure is a grey slate roof.

Just as many other buildings in this area, Cowper House is listed with the English National Heritage Trust.
Image Courtesy of Wikimedia and chestertouristcom.
Sight description based on Wikipedia.