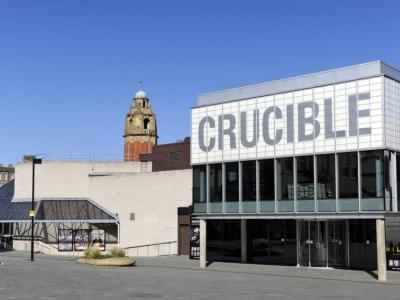 The Crucible Theatre is a theatre built in 1971 and located in the city center of Sheffield. As well as theatrical performances, it is home to the most important event in professional snooker, the World Snooker Championship. This demonstrated the versatility of the stage, which has since been adapted to Dance, Musical performance, as well as classical and modern theatre, and receives touring productions as well as hosting squash and spectacularly, the World Snooker Championship. In 2001 the Crucible was awarded the Barclays ‘Theatre of the Year Award, and is a Grade II listed building. The building went through a £15 million refurbishment between 2007 and late 2009 – opening during that period only for the 2008 and 2009 World Snooker Championships.
Image by Ben Sutherland on Flickr under Creative Commons License.
Sight description based on wikipedia