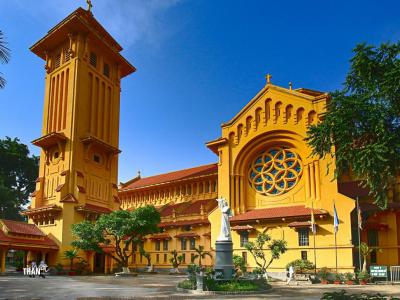 The Cua Bac church is one of the three major churches in Hanoi. The church was established by the French colonial rulers in 1932. Cua Bac is called by the locals as the Queen of the Catholic Saints in honor of Virgin Mary, the queen of all saints.

The Cua Bac Church was built between 1925 and 1930 along the Phan Dingh Phung and Nguyen Bieu Streets. The church was built as part of the plan devised by French architect, Ernest Hebrard to redesign the city of Hanoi. The structure, called the Church of the Martyrs, was constructed in front of the northern gate of the Cua Bac citadel. The building was called the Cua Bac church because of its location. Hebrard designed the structure with a combination of European and Vietnamese styles. The ornamentation has a distinct art deco influence while the sloped tiled roofs are influenced by Vietnamese pagoda. The church also has the oriental influence of being in harmony with its natural surroundings.

In 2006, the church was the venue of a joint worship service consisting of both Catholics and Protestants along with a guest of honor, the American President, George W. Bush.
Image by Hoanghatruonggiang on Wikimedia under Creative Commons License.