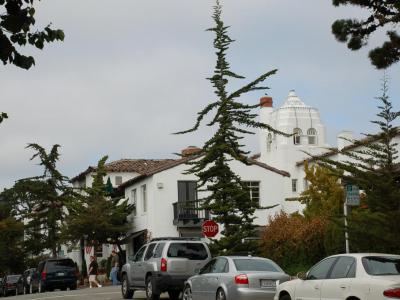 Cypress Inn has been in Carmel since 1929 and is the most well-known hotel in the United States that is dog-friendly. The hotel has been co-owned by actress and animal activist Doris Day for over 20 years. Over the years, the hotel has gotten a reputation for being a gathering place for pets and their owners.

The outside of the Cypress Inn features beautiful stone, Mediterranean-style architecture. One of the highlights is a restaurant called Terry's Lounge, which also features an outdoor seating area. Visitors can enjoy an array of Mediterranean-inspired dishes, as well as cocktails and delicious dessert items.

Terry's Lounge is also a popular place for entertainment. Some of the most popular Carmel-based artists perform here on a regular schedule, offering everything from vocals and piano to full bands with guitars and percussion. The atmosphere is relaxing.
Image Courtesy of Flickr and Brad Coy.