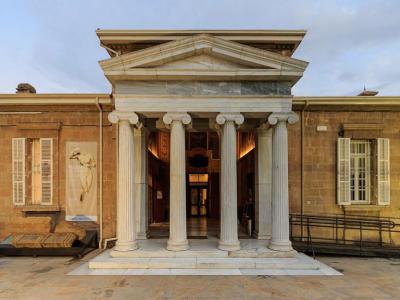 The Cyprus Museum, or Cyprus Archaeological Museum, is the oldest and largest archaeological museum in Cyprus. The museum houses artefacts discovered during numerous excavations on the island. The museum is home to the most extensive collection of Cypriot antiquities in the world and is located on Museum Street in central Nicosia. Its history goes hand in hand with the course of modern archeology (and the Department of Antiquities) in Cyprus. Of note is that only artifacts discovered on the island are displayed.

As an institution, the Cyprus Museum was founded in 1882 during the British occupation of the island following a petition by the Cypriot people. The initial museum was funded by private donations and was temporarily housed in existing governmental offices. It moved to its own premises in 1889 on Victoria Street within the medieval walls of the city. Construction of the current building began in 1908 and was originally dedicated to the memory of the British monarch, Queen Victoria. Soon after its inception, the museum started receiving items from the numerous excavations on the island, mainly run by British and European expeditions.

The museum consists of fourteen display halls surrounding a square central area which comprises auxiliary offices, a library, storerooms and laboratories for preserving and studying items in the collection. The displays in each hall follow a chronological and a thematic succession starting from the Neolithic period and ending with the Roman period.

This sight is featured in a self-guided walking tour of Nicosia, Cyprus within the mobile app "GPSmyCity: Walks in 1K+ Cities" which can be downloaded from iTunes App Store or Google Play. Please download the app to your mobile phone or tablet for travel directions for visiting this sight. The app turns your mobile device to a personal tour guide and it works offline, so no data plan is needed when traveling abroad.