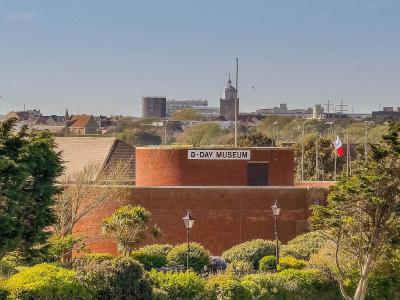 The D-Day Museum is located in Southsea, near Portsmouth in Hampshire, England. Opened in 1984 by HM Queen Elizabeth The Queen Mother, it tells the story of Operation Overlord during the Normandy D-Day landings. The museum houses the Overlord embroidery and the display involves a film show including original footage and archive film. The D-Day Museum is home to the Overlord Embroidery and was specially built to hold it. The Overlord Embroidery took five years to complete and measures 272 feet long. It is the largest work of its kind in the world. Visitors are handed a Sound alive device upon entering the museum, which allows them to hear an audio commentary. In addition to the film and embroidery there are also vehicles and displays of other material associated with D-Day and the war. The museum has its own shop and restaurant.
Image by Colin Smith on Wikimedia under Creative Commons License.
Sight description based on wikipedia