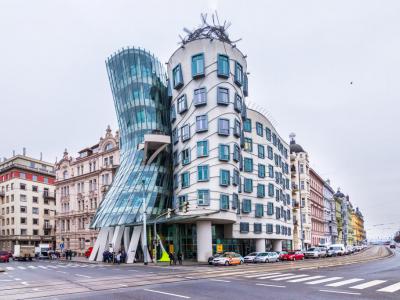 The Dancing House ('Tančící dům') is the nickname given to the Nationale-Nederlanden building in downtown Prague, at Rašínovo nábřeží 80. It was designed by Croatian-Czech architect Vlado Milunić in co-operation with Canadian architect Frank Gehry on a vacant riverfront plot (previously occupied by the building destroyed during the Bombing of Prague in 1945). The Dancing House was completed in 1996. Its very non-traditional design was controversial at the time.

The Czech president Václav Havel, who had lived for decades next to the site, supported it, hoping that the building would become a center of cultural activity. Originally named “Fred and Ginger” after Fred Astaire and Ginger Rogers, as it resembles a pair of dancers, the house stands out from the prevalent Baroque, Gothic and Art Nouveau architecture for which Prague is quite famous. Quite often it is also jokingly referred to as the "Drunk House".

Why You Should Visit:
Quite different from most of the city's other architecture.
Offers a great view of the city, particularly of the Prague Castle and Vltava River.
Permanent and temporary art exhibitions inside.

Tip:
Take elevator to the rooftop; buying a drink will replace the ticket to the terrace.
There is no entrance fee to the building itself. The terrace is accessible via the Glass Bar.