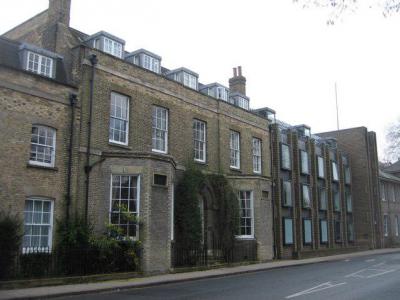 A small, modern college to the south of Silver Street, opposite Queens’ College and close to Mill Pond and an area of fenland at the edge of the city centre, Darwin College is one of five Cambridge graduate colleges. Founded in 1964, it was the first college to only admit graduates and the first to admit women. Darwin College is named after Charles Darwin, the famous British naturalist who conducted much of his research within the city of Cambridge. Many of Darwin’s collections, which he used to build his theories of evolution and natural selection, published in his 1859 thesis, "On the Origin of the Species", are housed in the city’s Zoology Museum on Downing Street.

Newton Grange, the oldest building in Darwin College, was once home to the Darwin family. A collective of colleges, mindful of the need for a specialist graduate college within the city, purchased the building from Darwin’s estate in the 1960s. The college has expanded since its foundation to include the nearby Hermitage building and a new library complex. One of Cambridge University’s newest colleges, Darwin college hosts an annual series of themed lectures, the Darwin Lecture Series, which have quickly become a highlight of the university calendar.

Why You Should Visit:
Very serene and informal college, with gardens you can actually walk on! The grounds are lovely and include a private island across part of the river, reached by two bridges.
During the day you can enjoy a lunchtime humanities seminar and a sun-filled dining hall. In the evening, you won't find a better or friendlier college bar than "DarBar".
Image by Sebastian Ballard on Wikimedia under Creative Commons License.