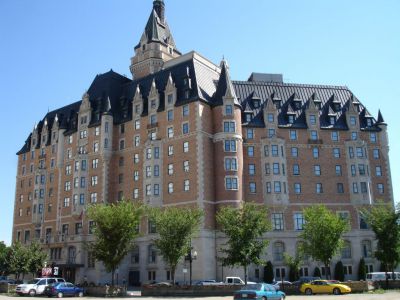 The Delta Bessborough Hotel has 225 guest rooms, numerous meeting facilities and function rooms, two restaurants, a lounge, a pool, a fitness facility and 5 acres (20,000 m2) of private waterfront gardens backing onto the river in downtown Saskatoon. The gardens are used to host large functions - they are commonly used for weddings, business barbecues, retirement parties, concerts, and as a venue for the Sasktel Saskatchewan Jazz Fest. It hosted the Police and Fire Can-Am games in the summer of 2008.
Image Courtesy of Wikimedia and Drm310.
Sight description based on Wikipedia.