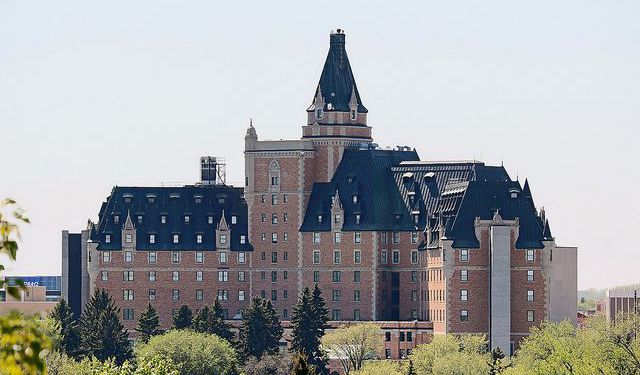 Sitting on the banks of the South Saskatchewan River, Saskatoon is the largest city of Canada's Saskatchewan province and is named after the berry native to the region. It has been the regional cultural and economic hub right from inception in 1882 and is currently a home to the University of Saskatchewan. Nicknamed "Paris of the Prairies", Saskatoon is renowned for its diverse and vibrant culture reflected in its historic and cultural attractions found throughout the downtown area. If you wish to learn more about the history and present day of Saskatoon, follow this orientation walk.
Image Courtesy of Flickr and Robert Linsdell.
How it works: Download the app "GPSmyCity: Walks in 1K+ Cities" from iTunes App Store or Google Play to your mobile phone or tablet. The app turns your mobile device into a personal tour guide and its built-in GPS navigation functions guide you from one tour stop to next. The app works offline, so no data plan is needed when traveling abroad.

The Memorial Gates are the main gates of the University of Saskatchewan. Initially they were designed as the main gates to the University but because of the large number of vehicles passing through that zone, it was decided that the entrance would be closer to the Royal University Hospital. The gates were established in 1927 as a memorial in honour of those who left this institution and died during the Great War.
Image Courtesy of Wikimedia and SriMesh.
3

3) Ukrainian Museum of Canada (must see)

The Ukrainian Museum of Canada is located in the central district of Saskatoon. There are many exhibits representing Ukrainian culture and history. The museum was founded in 1936 and was the first museum of its kind in Canada. In it you can see traditional Ukranian clothing, linens, tools, books, photographs, documents, a huge collection of pysanky (Ukrainian Easter eggs), religious items, wooden carvings and many more. There's also a gift shop where you can buy a variety of authentic Ukrainian clothing and gifts. Visitors can come Tuesday to Saturday between 10:00 am and 5:00 pm and Sundays: from 1:00 pm till 5:00 pm. September to March: Closed Sundays
Image Courtesy of Flickr and 2sirius.
4

4) Cathedral of St John the Evangelist (must see)

The Cathedral of St. John the Evangelist, located at 816 Spadina Crescent East, Saskatoon, is the cathedral of the Anglican Diocese of Saskatoon. St. John's, its first Anglican parish, was not established until 1902 owing to the substantially Methodist and to a lesser extent Presbyterian character of the early settlement, it having been founded as a temperance colony. The first St. John's church, a wooden frame building, was erected in 1903.

The present brick, Tyndall stone and terra cotta structure was raised in 1912-17, in an unornamented neo-Gothic style. Its chief distinguishing characteristic is a rood screen at the chancel steps. The rood screen, pulpit, lectern, and high altar are made of Carrara ware (Doulton white terra cotta resembling Italian Carrera marble). The cornerstone was laid in 1912 by the Governor General of Canada, Prince Arthur, Duke of Connaught. The building's foundation is made of fieldstone.

St. John's was designated a pro-cathedral in 1924 while Saskatoon remained part of the Anglican Diocese of Saskatchewan with its cathedral in Prince Albert. In 1932 the Diocese of Saskatoon was created and St. John's became its cathedral. The cathedral had only a small reed organ and piano by way of musical instruments until 1956 when a three-manual Hill, Norman and Beard organ was built; it was replaced by a two-manual Casavant Frères organ in 1981-1982.

Image Courtesy of Wikimedia and Vic D.
Sight description based on Wikipedia.
5

The Delta Bessborough Hotel has 225 guest rooms, numerous meeting facilities and function rooms, two restaurants, a lounge, a pool, a fitness facility and 5 acres (20,000 m2) of private waterfront gardens backing onto the river in downtown Saskatoon. The gardens are used to host large functions - they are commonly used for weddings, business barbecues, retirement parties, concerts, and as a venue for the Sasktel Saskatchewan Jazz Fest. It hosted the Police and Fire Can-Am games in the summer of 2008.

Image Courtesy of Wikimedia and Drm310.
Sight description based on Wikipedia.
6

The Land Titles Building is located at 311 21st Street East in the Central Business District of Saskatoon. The architectural firm of Storey and Van Egmond designed the building in the Romanesque Revival style. The building was constructed by Smith Brothers and Wilson in 1909. Additional expansions were done between 1910 and 1912. The building housed the land title office until 1959 when the office was transferred to the Law Courts Building. The provincial government stopped using the building when it was sold in 1994. The building now houses the law offices of Brayford and Shapiro.
Image Courtesy of Wikimedia and Julia Adamson.
Sight description based on Wikipedia.
7

The Hotel Senator is a landmark building located in downtown Saskatoon. The building was built as the Flanagan Hotel by James Flanagan, an early settler in Saskatoon and designed by Walter William LaChance, an architect who designed many local Saskatoon buildings at the turn of the century. When originally built, the hotel included many luxury features for 1907, including steam heating, hot and cold running water, telephones in each room and extensive use of marble and wood paneling. James Flanagan died in 1909; the hotel was subsequently sold in 1910. Today the property is designated a protected building. It houses a european-style boutique hotel with 38 rooms.
Image Courtesy of Wikimedia and Drm310.
Sight description based on Wikipedia.
8

Broadway Bridge is an arch bridge that spans across the east and west banks of the South Saskatchewan River in Saskatoon.

The bridge was constructed as a "make-work" project during the Great Depression. It was built in 1932 by the contractor R.J. Arrand Construction Co. It was designed by Chalmers Jack (C. J.) MacKenzie (on leave from being Dean of Engineering at the University of Saskatchewan). For this reason, the bridge was originally called the Dean's Bridge in its early period; it was formally named the Broadway Bridge as it connects Broadway Avenue on the east shore with 19th Street and 4th Avenue in Saskatoon's downtown core. The city once considered changing the name to George V Bridge in honour of the King.

The year-long closure of the nearby Traffic Bridge in late 2005 greatly increased the amount of daily traffic crossing the bridge. The image of the Bessborough Hotel framed within one of the arches of the Broadway Bridge is considered one of Saskatoon's iconic images.
Image Courtesy of Flickr and zemistor.
Sight description based on Wikipedia.
10

Broadway Avenue is an arterial road and commercial street in Saskatoon, Saskatchewan. It begins at the east end of the Broadway Bridge and continues south for about 4 kilometres until terminating at a cul-de-sac in the Avalon neighbourhood. The commercial portion, and the section usually referred to colloquially as "Broadway," is composed of the five blocks running south from the Broadway Bridge to 8th Street East, as well as the adjoining blocks east and west.
This section makes up the Broadway Business Improvement District, and is a popular shopping and cultural destination of Saskatoon, featuring many restaurants and bars, boutique shops, local businesses, and annual street festivals, including the Saskatoon Fringe Theatre Festival.
Image Courtesy of Flickr and Richard Gillin.
Sight description based on Wikipedia.
11

The Broadway Theatre is an art film and performance theatre located on Broadway Avenue in the Nutana neighborhood of Saskatoon. The theatre is Canada's only community-owned non-profit reperatory cinema. The Streamline Moderne style movie theatre was designed by George Forrester with the architectural firm of Webster and Gilbert and opened on December 5, 1946. The theatre was Broadway's entertainment destination during the post-World War II years.

The theatre seats 240 in a centre bank of seats with another 95 in each of the side banks for a total of 430 seats, plus 6 wheelchair stations. The stage is of a proscenium style, made of black masonite and measures 10.79 metres (35.4 ft) wide and 7.32 metres (24.0 ft) deep. The movie screen is 7.8 metres (26 ft) wide by 3.77 metres (12.4 ft) high, with a projection throw of 31.39 metres (103.0 ft). The lobby has terrazzo flooring and recessed valance lighting around the doorways to the theatre area.
Image Courtesy of Flickr and daryl_mitchell.
Sight description based on Wikipedia.