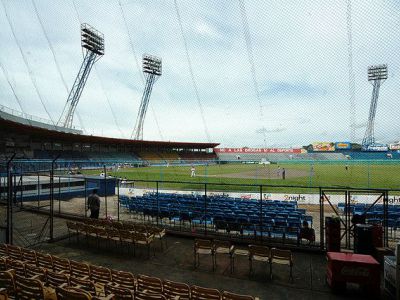 Dennis Martínez National Stadium is located in Managua. It was named after former MLB player Dennis Martínez. The stadium was built in 1948 and is Nicaragua's national stadium. It is used mainly for baseball but also serves as a venue for concerts, football, religious events and has a capacity of 30,100 people. It is the home stadium of Indios del Bóer baseball team and Deportivo Walter Ferretti football team. Inside the stadium is a hall of fame near the entrance showing medals, cups, photos and memories of Nicaraguan players. There is also a gym located inside.

The stadium has been renamed three times. Built in 1948, it was originally named "El Estadio Nacional" (The National Stadium). On November 20, 1998, the 50th anniversary of the founding of the stadium, then-President Arnoldo Alemán issued a decree changing the stadium's name to Estadio Nacional Dennis Martínez. Dennis Martinez, was Major League Baseball's first Nicaraguan-born player is the only pitcher born outside of the United States to have thrown a Perfect game.
Image Courtesy of Flickr and Zach Klein.
Sight description based on Wikipedia.