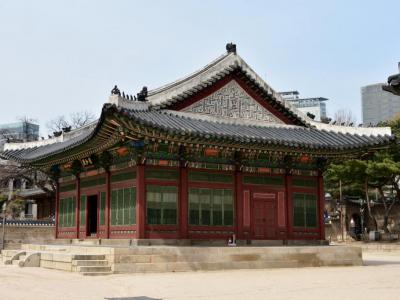 Deoksugung Palace is the smallest of the Five Grand Palaces built by the Joseon Dynasty. This residence became a royal palace after the other palaces burned in 1592. King Gwanghaegun and King Injo were crowned in Jeukjodang Hall in the 1600s.

Deoksugung Palace was heavily damaged during colonial rule. The palace is now only about one-third of its original size. Hamnyeongjeon Hall was the sleeping residence for King Gojong after he moved to the palace in 1897.

Deoksugung Palace has many interesting architectural features. It includes buildings made from stucco, stone, and wood with architectural style blend eastern and western designs. Visitors will also find a beautiful western-style garden and fountain.

The neoclassical Seokjojeon Hall was built in 1910. With its triangular roof and tall collonades, this building is a striking departure from traditional Korean architecture. The Daehan Empire History Museum is located inside Seokjojeon Hall.

Jeonggwanheon, built around 1910, combines eastern and western styles. Kings in the Joseon Dynasty had their portraits enshrined here.

Don't miss the colorful changing of the guard outside Daehanmun Gate.

Why You Should Visit:
This is the only palace in Seoul where you can take photos with the Royal Guards after the changing ceremony. Unlike other palaces, you can also enter the grounds at night to enjoy a moonlit stroll. Beyond the palace, you can explore the historic neighborhood and the famous Stonewall Walkway along the palace walls.

Tip:
Going inside the castle, you'll need to pay a fee, unless you're wearing a 'hanbik' – then it's free!
Make sure you check out the Jeongdong Observatory, located next door to the palace. From the observation deck (18th floor) you can capture panoramic views of the Deoksugung Palace grounds, CBD skyline, City Hall grounds and other landmarks – and its free! You'll get some amazing photos as a souvenir.