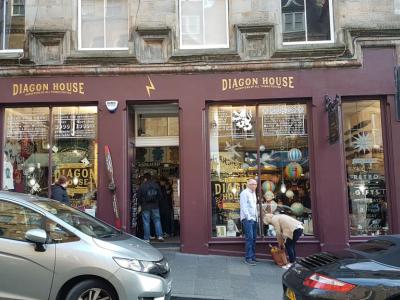 Museum Context, otherwise known as Diagon House, is the flagship store on Victoria Street. Similarly to its sister store at 42-44 Cockburn Street, this place is quite unique in terms of offering visitors and locals alike an authentic Harry Potter experience that celebrates Edinburgh as the birthplace of Harry Potter and J.K. Rowling’s wonderful legacy.

The brainchild of Alice and Andrew McRae, a conservation architect, this venue may appear a bit “scary” to the claustrophobic lot with its immersive shopping abundance, similar to that, perhaps, of the bustling Diagon Alley where Harry had to elbow his way through the sniggering Slytherins while purchasing his new year supplies.

Inside the shop you will find a world-class selection of officially licensed Harry Potter merchandise, which lures here Harry Potter pilgrims in their numbers from all over the globe, queuing up anxious to get in, from the early hours in the morning until the evening.

Having marked its 20th anniversary, the shop rebranded as Museum Context, honouring its eclectic Scottish collection.
Image by Stinglehammer on Wikimedia under Creative Commons License.