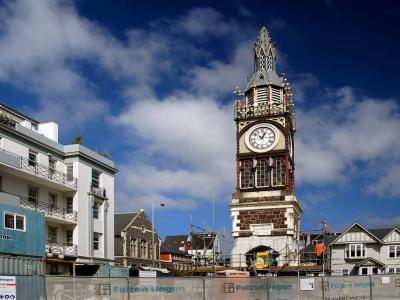 A number of Jubilee clocks were constructed and erected throughout the British Empire in commemoration of the Golden and Diamond Jubilees of various British monarchs. This Diamond Jubilee Clock Tower, located at the intersection of Victoria Street and Montreal Street, marks the Diamond Jubilee of Queen Victoria. It is made of volcanic stone and limestone with ornate wrought iron work and coloured glass. The tower also has two white marble plaques and one bronze plaque set above the arches.

It was seriously damaged by earthquake on 22 February, causing the clock to stop at 12:55. The clock itself needed to be restored, but it was considered to leave one of the clock faces at 12:51 as a reminder of the earthquake. On 22 October 2013, Christchurch Mayor Lianne Dalziel officially unveiled the newly restored Jubilee Clock Tower, and placed a time capsule on the site for future generations to discover.
Image by Bernard Spragg. NZ on Flickr under Creative Commons License.
Sight description based on wikipedia

This sight is featured in a self-guided walking tour of Christchurch, New Zealand within the mobile app "GPSmyCity: Walks in 1K+ Cities" which can be downloaded from iTunes App Store or Google Play. Please download the app to your mobile phone or tablet for travel directions for visiting this sight. The app turns your mobile device to a personal tour guide and it works offline, so no data plan is needed when traveling abroad.