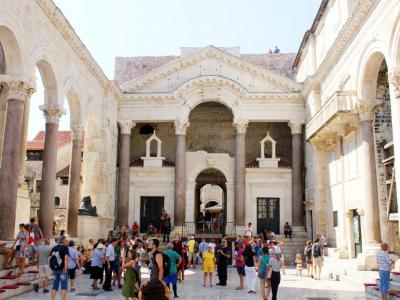 Diocletian's Palace was built by the Roman Emperor Diocletian. The building is designed in a half-Greek and half-Byzantine style. Diocletian built the massive palace in preparation for his retirement on 1 May 305 AD. It lies in a bay on the south side of a short peninsula running out from the Dalmatian coast, four miles from Salona, the capital of the Roman province of Dalmatia. The terrain slopes gently seaward and is typical karst, consisting of low limestone ridges running east to west with marl in the clefts between them.

In November 1979 UNESCO, in line with the international convention on cultural and natural heritage, adopted a proposal that the historic city of Split built around the Palace should be included in the register of World Cultural Heritage.

Why You Should Visit:
Impressive not only due to its age and size but due to the fact that a part of the lively city is built among the ruins.
It makes a beautiful place to walk around, full of inviting alleyways and picturesque buildings.
No cars are allowed which makes it even more special, but be prepared for lots of other tourists!

Tip:
Great at night – you can avoid a large number of tourists and take advantage of the nightlife all around it.
During the day, take a guided tour to visit as it's easy to get lost and miss out on really interesting facts.
Look around for Game of Thrones filming locations!
Image by Rialfver on Wikimedia under Creative Commons License.
Sight description based on wikipedia

This sight is featured in a self-guided walking tour of Split, Croatia within the mobile app "GPSmyCity: Walks in 1K+ Cities" which can be downloaded from iTunes App Store or Google Play. Please download the app to your mobile phone or tablet for travel directions for visiting this sight. The app turns your mobile device to a personal tour guide and it works offline, so no data plan is needed when traveling abroad.