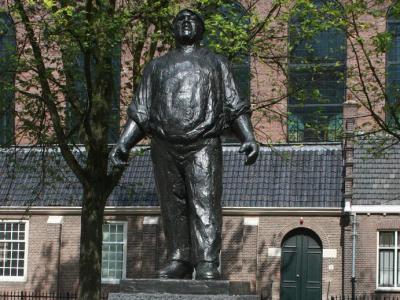 Outside the Portuguese Synagogue, standing on a small square in a stark, exposed position, the Dockworker statue by Dutch sculptor Mari Andriessen honors Amsterdam workers – not just dockers – who, in February 1941, went on strike to protest against the Nazi treatment of the city’s Jews. The direct causes were a series of arrests and pogroms held by the Germans in the old Jewish neighborhood of Amsterdam, in reprisal for the wounding of several Dutch police officers during a street fight.

Considered to be the first public protest against the Nazis in occupied Europe, the subsequent strike was organized by the outlawed Communist Party and spearheaded by the city’s transport workers and dockers, lasting for two days; on 26 February, 300,000 people joined the protests. On the third day, the strike was harshly suppressed by the Germans but is still commemorated each February 25 by an annual wreath-laying ceremony as well as a march past the Dockworker statue. All political parties, as well as the city public transport authorities and organizations of Holocaust survivors, participate in the remembrance.
Image by A.A.W.J. Rietman on Wikimedia under Creative Commons License.