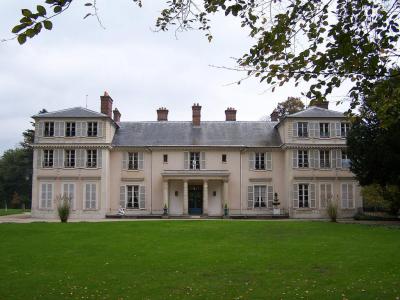 The Domaine de Madame Elizabeth is owned by the Conseil Général des Yvelines and is only open to the public on rare occasions, but its beautiful 8-hectare park and orangery can be visited.

The rectangular two storey building with its pavilions on each end and its six-columned portico was built in 1770 by Alexandre Louis Etable de la Brière. It was commissioned by the Prince and Princess Rohan-Guéméné as a summer residence.

When the prince went bankrupt in 1783 King Louis 16th bought the domain for his young sister Elizabeth. Elizabeth was a sweet child and very fond of her brother, the king and his wife Marie Antoinette and she never married so that she could live with them.

She was only 19 when she was given the domain. It was Marie-Antoinette who surprised her with the domain while they were out on a carriage ride together. She wasn’t allowed to sleep in the house because she was underage and had to wait until she was twenty-five before she could spend a night there.

However, she returned there most days and entertained her friends there. She had one room on the ground floor turned into a dispensary for the poor and for the servants of the Royal household.

During the Revolution the house was turned into a factory, but was restored to its former beauty in the late 19th century.
Image by ℍenry Salomé on Wikimedia under Creative Commons License.