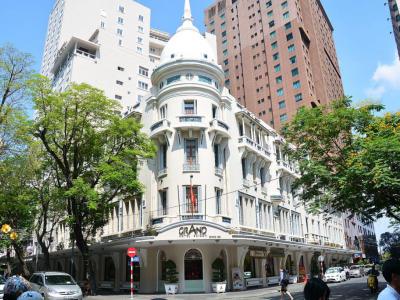 Dong Khoi Street is one of the busiest roads in Ho Chi Minh City. It was immortalized in the novel 'The Quiet American' by the British author, Graham Greene, which later became a popular Hollywood movie.

The Dong Khoi Street extends between the Nguen Du Street and Ton Duc Thang Street. It was called the Rue Catinat under the French Rule and is flanked by many elegant French colonial style buildings. The name was changed to Freedom Street or Tu Do Street during the short-lived rule of the South Vietnam government. After the reunification of Vietnam in 1975, the street got its present name Dong Khoi, which means Total Revolution Street.

The most important landmark buildings of Ho Chi Minh City are found in Dong Khoi Street. Famous restaurants, like the Nam Kha Restaurant, and the biggest hotels, like the colonial Caravelle Hotel, the Continental Hotel, and the Majestic Hotel are located here. High-end shopping plazas and small local shops coexist side by side along the street and one can purchase some of the finest silk and silk garments and embroidered textiles from one of the many quaint local stores. Among the other landmark buildings in the street are the Saigon Notre Dame Basilica, the Saigon Opera House, and the Central Post Office.

Why You Should Visit:
Very clean – a great street to walk down and stretch your legs.
You'll find a lot going on here and there are several places to enjoy a local meal.

Tip:
It would be a good idea to bring an umbrella with you as the weather in the city is quite unpredictable at times.
Also, try a small souvenir shop called 'Vietnamese Handmade' near the Cathedral that sells some unique gifts not found elsewhere.
Image by Kham Tran on Wikimedia under Creative Commons License.

This sight is featured in a self-guided walking tour of Saigon/HoChiMinh City, Vietnam within the mobile app "GPSmyCity: Walks in 1K+ Cities" which can be downloaded from iTunes App Store or Google Play. Please download the app to your mobile phone or tablet for travel directions for visiting this sight. The app turns your mobile device to a personal tour guide and it works offline, so no data plan is needed when traveling abroad.

Create Your Own Walk in Saigon/HoChiMinh City

Creating your own self-guided walk in Saigon/HoChiMinh City is easy and fun. Choose the city attractions that you want to see and a walk route map will be created just for you. You can even set your hotel as the start point of the walk.

Ho Chi Minh City, otherwise known as Saigon, is a busy, vibrant metropolis, largest in Vietnam and perhaps one of the coolest in the world, popularized by numerous Vietnam war movies. The city streets are filled with bikes and curious visitors admiring local sights. The latter are plentiful and include museums, palaces and skyscrapers, among others, featuring both SouthEast Asian and French...  view more

Ho Chi Minh is the largest city in all of Vietnam. The city is bustling with activity from morning to night. Motorbikes, somewhat of a symbol of Ho Chi Minh, fill the streets everyday as locals hurry off to work or school. Shops are crowded with women buying local goods for the home and family. This next tour will give you a taste of daily living in the wonderful Ho Chi Minh City.

Ho Chi Minh City is a paradise for shoppers, as it offers a great variety of handicrafts, embroidery, and lacquer-ware. There are several streets in Saigon that are especially famous for their shopping venues. This self-guided tour will lead you to the best shops, shopping streets and markets of Ho Chi Minh City.