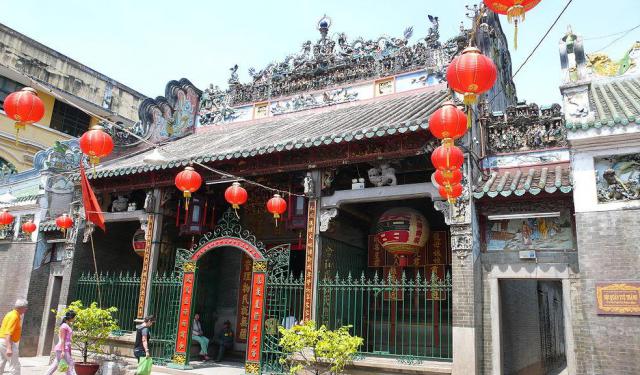 Image by Christopher on Wikimedia under Creative Commons License.

The relationship of Vietnam and China goes back over 2,000 years, during which the Vietnamese culture, customs, administrative system and even language have been heavily influenced by the great northern neighbor. While Vietnam has its own spoken language, until the late 1800s its official written language was Chinese.

There is a large ethnic Chinese community living in the western part of Ho Chi Minh City. Similarly, there are many Chinese temples and pagodas there, and the area's main market sells traditional Chinese items and food. This self-guided walking tour takes you to the most popular attractions in and around Ho Chi Minh City's Chinatown.
How it works: Download the app "GPSmyCity: Walks in 1K+ Cities" from iTunes App Store or Google Play to your mobile phone or tablet. The app turns your mobile device into a personal tour guide and its built-in GPS navigation functions guide you from one tour stop to next. The app works offline, so no data plan is needed when traveling abroad.

Located in the Cho Lon or Chinatown area of Ho Chi Minh City, this temple is dedicated to Thien Hau, the Goddess of the Sea. Members of the Chinese community and the Vietnamese come here to pray for happiness and prosperity.

Thien Hau or Mazu, the Goddess of the Sea is worshipped by the seafaring communities of Southern China and by Chinese communities around the world who depend on the sea for their livelihood. She is not a Taoist or a Buddhist Deity but has been assimilated by both religions. The Thien Hau temple was first built in the year 940. It has been destroyed and rebuilt many times and the present building dates back to 1900. It is believed that she left two giant turtles to look after the people and ascended to the heavens.

The interior of the Thien Hau Temple is a large covered courtyard and the statue of chief deity and two other Goddesses are located at one end. Urns to place incense sticks are placed in the open spaces around the courtyard. The ceiling is covered with intricate porcelain reliefs depicting a 19th-century Chinese city and tales from Chinese history and legends. A festival is held in honor of the birthday of Thien Hau on the 23rd day of the 3rd Lunar Month. Two effigies of demons are burned and the lion dance is performed as part of the festivities.

Tip:
You need time to admire the many carvings, and a guide will add value, unless you can read Cantonese!
There's a souvenir shop inside that also sells incense sticks or the coiled incense 'cones' you can light and have hung up for you.


Image by Jean-Pierre Dalbéra on Flickr under Creative Commons License.
2

The Quan Am Temple is located in the predominantly Chinese, Cho Lon area of Ho Chi Minh City. It is dedicated to Quan Am the Chinese Goddess of mercy.

Chinese traders and Vietnamese merchants raised funds and constructed the Quan Am Temple in 1816. It was expanded by funds raised by a congregation from the Chinese Fujian province. From the date of construction, it has remained one of the most frequented temples by Chinese and Vietnamese worshippers and contains both Taoist and Buddhist objects of worship.

Visitors and worshippers enter the pagoda through a red traditional gate. There is a small courtyard between the gate and the temple complex. There are relief panels at both ends depicting Buddhist motifs. The central altar is dedicated to Ngoc Huang or the Jade Emperor. Other altars are of the Amitabha Buddha and three Bodhisattvas. Inside the Pagoda, the main altar is that of the Goddess of the sea, Thien Hau. Beyond the altar the main deity is located in a partially covered courtyard. The Chinese Quan Am statue is flanked by two smaller figures. There are many other altars dedicated to figures from Buddhist and Taoist legends and wooden figures of Arhats or Buddhist holy men. On the other side of the street is a garden that forms part of the temple complex with an artificial pond surrounded by relief panels depicting Taoist motifs.
Image by DoktorMax on Wikimedia under Creative Commons License.
3

The Cha Tam Church is a Roman Catholic parish Church in Ho Chi Minh City. It has a distinctive colonial façade and is painted in pastel yellow and white.

The church was founded due to the efforts of a Chinese Catholic Priest, Francis Xavier Tam Assou in 1900. On December the 3rd, 1900, which coincided with the feast of St. Francis Xavier, Bishop Bossard laid the foundation stone. It was consecrated in 1902 and Tam Assou was its first priest. It was here that the Roman Catholic president of South Vietnam Ngo Dinh Diem and his brother Ngo Dinh Nu hid during an attempted coup. When their attempts to contact loyal military officers failed, they were discovered and shot dead after being taken into custody by the leaders of the coup.

Cha Tam has been an active church from its foundation to date. The tower holds the statue of Tam Assou. He was a Chinese born vicar apostolate or representative of the Pope. He was sent to look after the affairs of the Chinese Catholics in the Cho Lon neighborhood of Saigon. A daily mass is held and the congregation consists of 3000 Vietnamese and 2000 ethnic Chinese parishioners. It is the only Catholic Church in Saigon with horizontal lacquered boards similar to a Chinese temple in the interiors.

Why You Should Visit:
Not the biggest church in town, but this one is a great place for a breather and it does boast a fine garden off to the side.

The Binh Tay Market located in the Cho Lon area of Ho Ch Minh City draws tourists looking for bargains. It is also famous because of its unique Chinese architecture. It is a large wholesale market with a green central courtyard.

The Binh Tay market was funded by a wealthy Chinese trader, Quach Dam who came from Chiu Chow in China and made his fortune in Saigon. His trade name was Thong Heip and was nicknamed handicapped Thong by the local Chinese. He came to the city as a poor man who started recycling garbage. He soon diversified and became one of the most successful businessmen in the city.

At the center of Binh Tay Market is a courtyard. A statue of its founder once stood at the center surrounded by four bronze lions. The original statue was removed and a glass altar was placed at the location between 1976 and 1980. One can find the original statue in the Museum of Fine Arts. Shops selling international branded cosmetics are located on the second floor of the market. An array of bowls pots and pans for homes and restaurants are also on sale. It is known to the locals as a wholesale market where retailers come to buy products in bulk. Tourists can find interesting souvenirs here at bargain prices.
Image by John L. Beeman on Wikimedia under Creative Commons License.
5

The Phung Son Pagoda also called the Go Pagoda, is located in District 11, Ho Chi Minh City. It has been declared a national Historical and Cultural Vestige by the Government.

The Pagoda was built by a Bonze or monk named Lieu Thong between 1802 and 1820. Archeological excavations have revealed that there were structures from the Funan civilization at the site before the construction of the temple. According to legend, it was at one time decided to move the location of the temple. All artifacts were loaded on an elephant for transportation to the new site. On the way, the elephant tripped and many relics fell into a nearby pond. Local people saw this as a sign that the temple should stay in its original location. It has been renovated twice, once between 1904 and 1915 by the Bonze, Tue Minh and later in 1960.

The Phung Son Pagoda has many notable artifacts. There are over 40 gilded wooden statues. Other valuable objects are the Di Da Tam Ton statue, the gilded stone statue of the Buddha called the Ngu Hien Thuong Ky Thu and a statue of Tieu Dien made of ceramic. Archeological excavations around the temple have unearthed objects made of baked earth and ceramics belonging to the Funan Oc Eo civilization.

Tip:
The main entrances are locked most of the time, but the side entrance is open during prayer times (4-5pm, 6-7 pm).
Image by Gary Todd on Flickr under Creative Commons License.

Create Your Own Walk in Saigon/HoChiMinh City

Creating your own self-guided walk in Saigon/HoChiMinh City is easy and fun. Choose the city attractions that you want to see and a walk route map will be created just for you. You can even set your hotel as the start point of the walk.

For centuries, Vietnamese people have practiced Confucianism and Buddhism brought over to the country from the neighboring China. Added to these Eastern teachings in the 16th century was Christianity, introduced to Vietnam by Western missionaries. Resulting from this variety of faiths are a mixture of gorgeous Confucian and Buddhist temples, as well as Catholic churches found in Saigon (Ho Chi...  view more

While many still refer to the city as Saigon, it was renamed Ho Chi Minh City (HCMC) in 1976 after the reunification of North and South Vietnam. The name honors the first leader of communist North Vietnam, Ho Chi Minh. But many still call the inner business district Saigon, while the larger metropolitan area is known as HCMC.

For most of its early history, this was a scarcely populated area...  view more

Among other things, Ho Chi Minh City is known as a great shopping destination. Attesting to this are the plethora of street markets scattered across the entire city, with vendors selling all sorts of fresh fruit, local coffee beans and other produce, street food, and souvenirs at very competitive prices. There are also designated markets specialized in niche items, such as war memorabilia, silks,...  view more