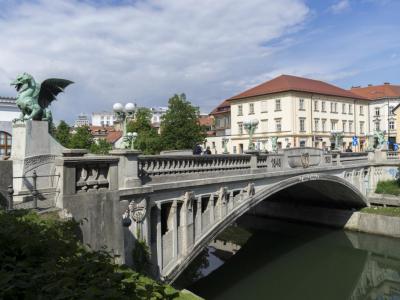 Dragon Bridge crosses the Ljubljanica River. The current concrete bridge was completed in 1901 and replaced an oak bridge damaged by the 1895 earthquake. The bridge was one of the first reinforced concrete bridges built in Europe and was Slovenia's first asphalt-paved bridge. Dragon Bridge was originally called Jubille Bridge and dedicated to Franz Joseph I, who ruled the area from 1848 to 1888.

The triple-hinged arched Dragon Bridge is thought to be the most beautiful Vienna Secession style bridge. The bridge features four imposing sheet-copper dragon statues, which are the city's most well-known landmarks. The bridge also features 16 smaller dragon statues. The dragons represent the famous legend of Jason and the Argonauts. In the legend, Jason killed a dragon and founded Ljubljana.

The bridge also features parapet lamps, which were originally gas-powered. Today, the bridge is a popular spot for photos.
Image Courtesy of Wikimedia and Thomas Ledl.