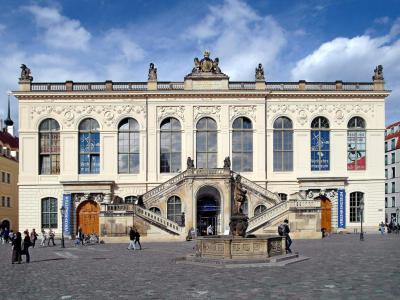 The Dresden Transport museum is aptly housed in the former stables of the electors of Saxony. All types of vehicles except spacecraft are stored and displayed here.

The Dresden Transport Museum lies within the Johanneum, a large renaissance building in Dresden’s old town that was once the royal stables. The Johanneum was used as an art gallery, porcelain museum and as an armory after it ceased to be the royal stable. On the 1st of May 1952, the High School of Transport and the Ministry of Transport decided to establish a museum to store the remains of the Saxon Railway Museum that was damaged in World War II. The damaged Johanneum was renovated with a new façade and the museum opened its doors in 1968. The roof was made of Duraluminum, the metal used for aircraft hangars.

The museum is a repository of all types of transport vehicles, from horse carriages to airplanes. There is a special section showing Germany’s contribution to the world of aviation, shipping, railways and public transport. Special simulators allow visitors to land an airplane or pilot a barge. A children’s section allows kids to run the toy train and play with other toys.

This sight is featured in a self-guided walking tour of Dresden, Germany within the mobile app "GPSmyCity: Walks in 1K+ Cities" which can be downloaded from iTunes App Store or Google Play. Please download the app to your mobile phone or tablet for travel directions for visiting this sight. The app turns your mobile device to a personal tour guide and it works offline, so no data plan is needed when traveling abroad.

Dresden boasts a vibrant nightlife. There are many different nightspots for all tastes. You may find a quiet place to spend the evening or opt for an energetic disco. There are many bars and clubs in the New Town of Dresden where prices are not as high as in the Old Town. Take this self-guided tour to explore the exciting nightlife of this city.