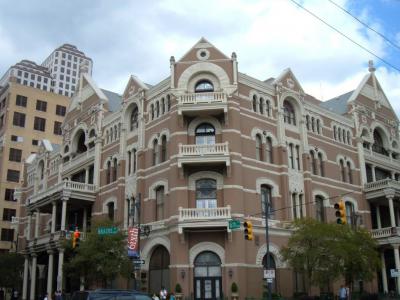 The Driskill Hotel, a Romanesque style building completed in 1886, is the oldest operating hotel in Austin, and one of the best-known hotels in Texas generally.

The Driskill was conceived and built by Col. Jesse Driskill, a cattleman who spent his fortune constructing "the finest hotel south of St. Louis". The hotel was completed at a cost of $400,000. Its four stories occupied almost half a block, with three arched entryways on the south, east, and north sides. Carved limestone busts of Driskill and his two sons, Bud and Tobe, crowned the hotel on each of these sides. Six million bricks went into the structure, along with limestone features. The hotel's 60 rooms included 12 corner rooms with attached baths, an almost unheard-of feature in any hotel of the region at that time.

The hotel included an open design to encourage airflow throughout the building and keep it cool; its primary feature was an open rotunda at the center that extended from the first to the fourth floors and culminated in a domed skylight.

Why You Should Visit:
Iconic landmark of Southern hospitality rich in historic architecture. One of the joys of visiting Austin, TX, outside its music culture, is a chance to stay at the Driskill Hotel. The historic architectural design of the structure and its interiors provide even more fuel for enthusiasm to return to Austin again and again.
Image by Christopher Eugene Lee on Flickr under Creative Commons License.
Sight description based on wikipedia