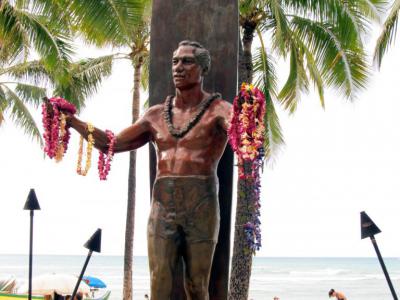 Duke Paoa Kahinu Mokoe Hulikohola Kahanamoku (August 24, 1890 – January 22, 1968) was a Native Hawaiian competition swimmer who popularized the ancient Hawaiian sport of surfing. He was born towards the end of the Kingdom of Hawaii, just before its overthrow, living into statehood as a United States citizen. He was a five-time Olympic medalist in swimming. Duke was also a Scottish Rite Freemason, a Shriner, a law enforcement officer, an actor, a beach volleyball player and a businessman.

Kahanamoku died of a heart attack on January 22, 1968, at the age of 77. For his burial at sea a long motorcade of mourners, accompanied by a 30-man police escort, moved across town to Waikiki Beach. Reverend Abraham Akaka, the pastor of Kawaiahao Church, performed the service, a group of beach boys sang Hawaiian songs, including "Aloha Oe", and his ashes were scattered into the ocean.

The City of Honolulu commemorated this Waikiki Beach burial site in 1990 with a 9-foot cast bronze statue of Kahanamoku by Jan Gordon Fisher that shows Kahanamoku with outstretched arms in front of his surfboard, flanked by honorary Hawaiian spears and surrounded by a dedication plaque and historic information marker. The statue's orientation that placed Kahanamoku's back to the sea was initially criticized as being contrary to Hawaiian custom. Nonetheless the statue is highly popular and its outstretched arms are continuously adorned with fresh flowers.
Image on Flickr under Creative Commons License.
Sight description based on wikipedia