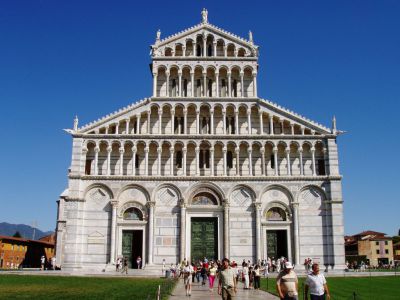 The Pisa Cathedral is the medieval cathedral that stands on the Miracles Square and it is a fine example of Italian-Romanesque architecture.

Busketo began work on the building in 1064 and his tomb is built into the façade in white stone and grey marble with colored marble discs. You will see an inscription about the foundation of the Cathedral and Pisa’s victory against the Saracens.

On the eastern end of the building there is the replica of the Pisa Griffon. The 11th century original, which is the largest known Islamic metal sculpture, can be seen in the Cathedral Museum.

The huge bronze doors were added after the original wooden ones were destroyed by fire in 1595. Above the doors are four rows of open galleries; there is a statue of the Madonna and Child and the Four Evangelists. Worshippers usually enter the church by a door built in 1180 by Pisano on the bell tower side of the cathedral.

The interior of the cathedral has black and white marble facings and the mosaics are in Byzantine style. The granite Corinthian columns come from the mosque in Palermo, which was captured by Pisa in 1063.

The gilded ceiling and frescoed dome were restored after the 1595 fire, as was the nave’s coffer ceiling. The fresco of “Christ in Majesty with the Virgin Mary and St John the Evangelist” luckily survived the fire and can be find in the apse.

To mark the beginning of the Pisan new year a system was devised in the cathedral whereby a beam of light shines through a round window on the south side of the nave and, precisely at noon on March 25, lands on the same spot every year: on top of a shelf affixed to a pylon on the opposite side of the church. The lamp at the center of the nave is called Galileo's lamp, because a legend says that the great scientist formulated his theory of isochronism of the pendulum while watching its oscillations from the roof of the nave. The original, however, smaller and very different than this one, is found today in the Camposanto.

Galileo Galilei was consecrated as a scientist here.
Image by Daderot on Wikimedia under Creative Commons License.