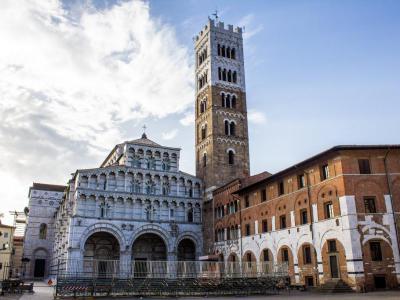 It is said the Cathedral of St. Martin was founded by San Frediano in the 6th century and rebuilt by Bishop Anselmo da Baggio in 1060. It came into its current form in the 12th and 13th centuries. Anselmo later became Pope Alexander II. In 1372, the apse of the church and the wall of the transept were completed. The style was Gothic.

The facade of the church is in three great arches surmounted by three rows of galleries filled with sculptures. To the right of the facade is the bell tower. It has a four-sided base and five rows of windows divided by pilasters. The crown is made of Ghibeline merlons.

The interior is laid out in a Latin cross with three naves. The two side naves are topped by false galleries. The central nave is contained in a semicircular apse with three large Romanesque windows.

The left aisle has a small chapel holding the sacred relic, the Holy Face of Lucca. The relic is a wooden crucifix with the image of Christ, supposedly carved by Christ's contemporary Nicodemus. It is said to have suddenly appeared in Lucca in 742 AD. The chapel itself was built by Matteo Civitali in 1484. Civitali was a sculptor of Renaissance Lucca.

Off the sacristy is the funeral monument of Ilaria del Carretto, made by the sculptor Jacabo della Quercia. Ilaria was the wife of Paolo Guinigi, Lord of Lucca until 1430. The Lady Ilaria died very young. Her image depicts her lying on the sarcophagus as if asleep, her faithful dog at her feet. Her ghost is said to haunt the Guinigi tower at night.

The Cathedral is also famous for its long association with members of the Puccini family who moved to Lucca from the mountain village of Celle in 1719. Giacomo Puccini’s personal involvement with the Duomo began when he was sent here to attend a seminary school.

The Cathedral, at one time, was a home of two magnificent organs: one from the 15th century and the other from the 17th. Little remains of these instruments today but the gallery and frontal pipes are still visible. From the early 1870s, Puccini took part in the Festival of Santa Croce at the Cathedral, first as a boy singer, then as a member of the choir, and later as a deputy organist.
Image Courtesy of Flickr and Med Cruise Guide.