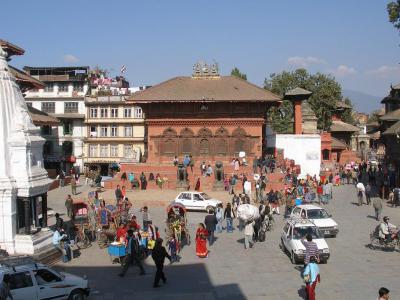 The literal meaning of Durbar Square is "Court Square". There are three preserved Durbar Squares in Kathmandu valley and one unpreserved in Kirtipur. The Durbar Square of Kathmandu is located in the old city and has heritage buildings representing four kingdoms (Kantipur, Lalitpur, Bhaktapur, Kirtipur), built over the centuries, the earliest dynasty that ruled over the Square being the Licchavi dynasty. There were further additions and refurbishments during the reign of the Mallas (9th century) and then the Ranas. The complex has 50 temples and is distributed in two quadrangles of the Durbar Square. The outer quadrangle has the Kasthamandap, Kumari Ghar and Shiva-Parvati Temple, while the inner quadrangle has the Hanuman Dhoka and the main palace.
Dealers in Durbar Square sell a multitude of Tibetan-style curios. These tempting artifacts made of silver, turquoise, coral or ivory are mainly fake, though you can find some interesting items too. Fine ethnic jewelry, in gold and silver, is another exquisite item that can be purchased in the old city.
Image by lavenderstreak on Flickr under Creative Commons License.
Sight description based on wikipedia

Want to visit this sight? Check out these Self-Guided Walking Tours in Kathmandu. Alternatively, you can download the mobile app "GPSmyCity: Walks in 1K+ Cities" from iTunes App Store or Google Play. The app turns your mobile device to a personal tour guide and it works offline, so no data plan is needed when traveling abroad.

Tundikhel is one of the hidden treasures of Kathmandu. On this huge green field colorful festivals are held frequently. If you are not fond of festivals, you may explore important landmarks that are situated nearby - Bhimsen Stambha, complimented by the Sundhara fountains, Sahid gate, Bhadrakali Temple, etc. Take this self-guided tour to discover the prominent attractions of Tundikhel in...  view more

Kathmandu valley has been traditionally considered one of the greatest treasure houses of art. Its culture can be discovered by visiting the numerous stupas, temples and shrines. But there is much more to Kathmandu than just that. Listening to a Newari music performance or learning about Nepal by visiting a museum, will give you a cultural insight into the destination. Take this self-guided tour...  view more