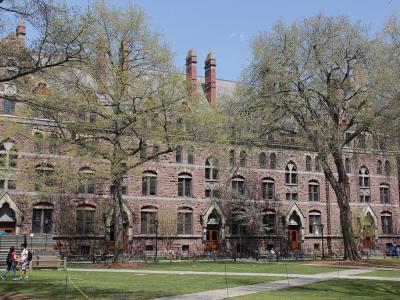 Durfee Hall is a freshman residential dormitory on the Old Campus of Yale University. Built in 1871, it is the second oldest residential building at Yale, only after Farnam Hall. Currently, the building is used to house first-year students of Morse College, who stay there for the duration of their freshman year before moving into Morse College proper.

Durfee Hall was completed in 1871 under the direction of Russell Sturgis, Jr. and named after the generous Yale benefactor Bradford M. C. Durfee. It was the second of a set of three buildings Sturgis designed that include Farnam Hall and Battell Chapel. The exterior of Durfee is covered in a combination of sandstone and bluestone, and is accentuated with gables, ornate turrets, and large brick chimneys.

The building was initially described simply as "large and costly." However, it was soon recognized as the defining piece of architecture on Yale's campus, and by the late 19th century, it was referred to by The New York Times as "the center of wealth at Yale" and as "one of the finest college dormitories in the United States."
Image Courtesy of Nick Allen.
Sight description based on Wikipedia.