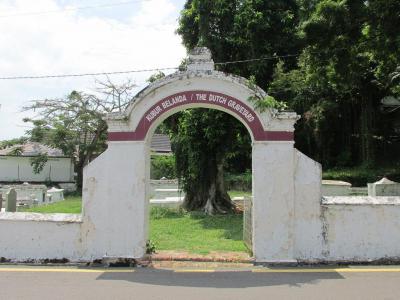 The Dutch Graveyard is a cemetery located at St. Paul's Hill behind St. Paul's Church. It was first used during the 17th century when Dutch forces occupied Malacca.

The Dutch Graveyard is a quiet sanctuary that is often overlooked by visitors. It is worth a stop to view some of the tombstones, such as that of Royal Navy Captain John Kidd.

There is no gate in the cemetery which allows 24-hour access. However, there is also no lighting at the cemetery. While this lends to the spooky atmosphere, those who are interested in reading the tombstones should plan to visit in the light of day.
Image Courtesy of Wikimedia and Orderinchaos.