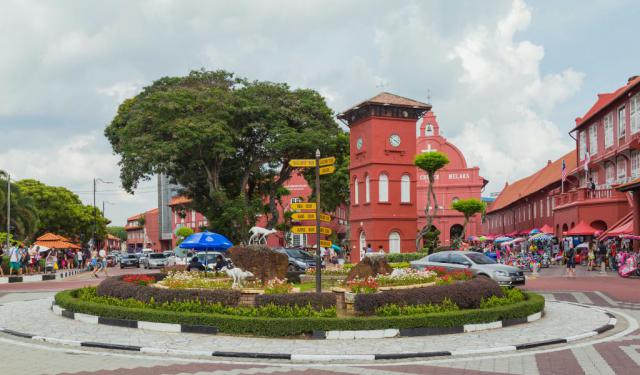 Image by Uwe Aranas on Wikimedia under Creative Commons License.

Melaka Town, the capital city of Melaka, the third smallest state in Malaysia, is a listed UNESCO World Heritage Site, renowned for its rich colonial past carefully preserved in the town center architecture. Among the most notable buildings are 16th century Portuguese-built St. Paul’s Church, 18th century Dutch-era Christ Church and the neighboring Stadthuys, the old town hall currently housing a museum of Malaccan history and ethnography. To explore these and other top attractions of Melaka, follow this orientation walk.
How it works: Download the app "GPSmyCity: Walks in 1K+ Cities" from iTunes App Store or Google Play to your mobile phone or tablet. The app turns your mobile device into a personal tour guide and its built-in GPS navigation functions guide you from one tour stop to next. The app works offline, so no data plan is needed when traveling abroad.

The Dutch Square was constructed between 1660 and 1700, the terracotta buildings showcase colonial Dutch style: the clock tower, the state house, the church all colored a memorable dusty red, with louvered windows and thick iron doors.
Image by Brian Jeffery Beggerly on Flickr under Creative Commons License.
2

Melaka's prominent Red Clock Tower is probably one of the city's most famous sights. It is located on Dutch Square in Melaka's Stadhuys, or central, district. It was built during the English colonial period. The clock tower was painted red so it would blend with its surroundings on Dutch Square.
Image by beggs on Flickr under Creative Commons License.
3

Queen Victoria's Fountain is a prominent city landmark and is one of the few existing structures left in Melaka from the period of British colonization. This beautiful fountain was created in 1901 as a monument to commemorate the Diamond Jubilee.
Image by Capella Boltiador on Flickr under Creative Commons License.
4

The church is built in Dutch Colonial architecture style and is laid out in a simple rectangle of 82 feet by 42 feet. The ceiling rises to 40 feet and is spanned by wooden beams, each carved from a single tree. The original Dutch windows were reduced and ornamented after the British takeover of Malacca and the porch and vestry were built only in the mid-19th century.

Image by Capella Boltiador on Flickr under Creative Commons License.
Sight description based on wikipedia
5

In 1924, the old Portuguese burial vault in the chancel of the church was partially uncovered. Further excavation was done in 1930 by the president of the newly formed Malacca Historical Society, Major C. E. Bone. In 1952, a statue of St. Francis Xavier was erected in front of the ruins of the church in commemoration of the 400th anniversary of his sojourn in Malacca.
Image by Horiuchi on Wikimedia under Creative Commons License.
Sight description based on wikipedia
6

The Melaka Sultanate Palace is a beautiful imitation of the palace that stood during the period of the Melaka Sultanate. Built at the foot of St. Paul's Hill in 1984, this architectural landmark is now home to the Melaka Cultural Museum, which focuses on the history of the region.
Image by y.square on Flickr under Creative Commons License.
7

In late November 2006, a structure part of the fort, believed to be the Middelsburgh Bastion was accidentally uncovered during the construction of 110 meter revolving tower in Malacca Town. Malacca Museums Corporation suspects the structure was built by the Dutch during the Dutch occupation of Malacca from 1641 to 1824.
Image by plassen on Flickr under Creative Commons License.
Sight description based on wikipedia
8

Bastion House is located on Jalan Kota next to A Famosa. It is a historical building that was constructed in 1910 by the British company Dunlop. The building was named Bastion House because it is located very close to the bastions of Fortaleza de Malaca, or the Melaka Fort.
Image by Eiffel on Wikimedia under Creative Commons License.
9

The Melaka Water Wheel is located beside the Melaka River near the tourist information center. Although it is just a replica and no longer functions, the wheel serves as a reminder of the city’s wealthy past, when it was used to fuel Melaka’s booming port trade.
Image by Nono Fara on Flickr under Creative Commons License.
10

This cultural venue is dedicated to the prominent Admiral Cheng Ho and has a variety of exhibits related to the life and times of the famous Admiral. Located on Lorong Hang Jebat in the historic part of the city, this museum will transport you back to the 15th century.
Image by Shioulin Kao on Flickr under Creative Commons License.
11

Kampung Kling Mosque, or Masjid Kampung Kling, is an old mosque situated at Jalan Tukang Emas. The original structure built by Indian Muslim traders in 1748 was a wooden building and in 1872, it was rebuilt in brick.

The architectural design of the mosque is a cross between Sumatran, Chinese, Hindu, and the Melaka Malay. The minaret, ablution pool and entrance arch were built at the same time with the main building. The mosque also has a blend of English and Portuguese glazed tiles, Corinthian columns with symmetrical arches in the main prayer hall, a Victorian chandelier, a wooden pulpit with Hindu and Chinese-style carvings, and Moorish cast iron lamp-posts in the place of ablution for pre-prayer cleansing. The Department of Museums and Antiquities completed conservation works on the mosque in the 1990's.
Image by Tomoaki INABA on Flickr under Creative Commons License.
Sight description based on wikipedia
12

The building conforms to the principles of feng shui and covers an area of 4,600 m2. Built in 1645 by Kapitan Lee Wei King with building materials imported from China, Cheng Hoon Teng served as the main place of worship for the local Hoklo (Hokkien) community. The main hall was built by Kapitan Chan Ki Lock in 1704 and was rebuilt in 1801 by Kapitan China Chua Su Cheong, who contributed to the aesthetic structural additions of the building. In 1962, then abbot Seck Kim Seng ordained Houn Jiyu-Kennett, a Zen nun from England and the future founder of the Order of Buddhist Contemplatives, at this temple. In 2003, Cheng Hoon Teng was awarded a UNESCO award for outstanding architectural restoration.
Image by Mr Tan on Wikimedia under Creative Commons License.
Sight description based on wikipedia
13

Jonker Street is also known as Jonker Walk or Jalan Hang Jebat (in the Malay language). It is a pleasant street in Chinatown, which is home to a vast array of stores. Here you will find unique antique items, wood-carved statues, household products, clothing, accessories and souvenirs.
Image by beggs on Flickr under Creative Commons License.
14

The oldest Chinatown in Malaysia is Malacca Chinatown and it is one of the few Chinatowns in the world located within a UNSECO World Heritage site.
Image by Xuanxu on Flickr under Creative Commons License.