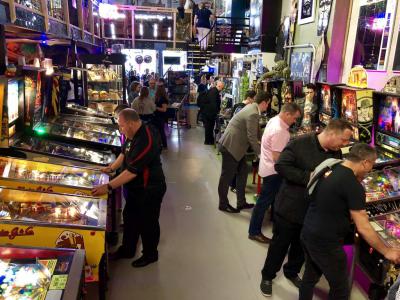 Another prominent attraction in the historic Delfshaven is the Dutch Pinball Museum (Nederlands Flipperkastmuseum). Just as its name suggests, the museum is dedicated entirely to the history of pinball machines. It was opened in August 2015 in a former warehouse on the Rijnhaven, with the remnants of the Port Railway still seen in front of the entrance.

Presented in the museum are approximately 120 pinball machines, spread over two floors. The majority of them are in full working order and can be played. Older exhibits, such as the first pinball machine with flippers from 1947, called the Humpty Dumpty, are found on the ground floor.

The floor upstairs is reserved for the newer exhibits, dating from the 1960s through the present, including the latest ones from the 21st century. Among these you can see the Addams Family, the Doctor Who, the Revenge from Mars, and the Indiana Jones pinball machines, to mention but a few.
Image Courtesy of Flickr and Dion Hinchcliffe.
Sight description based on Wikipedia.