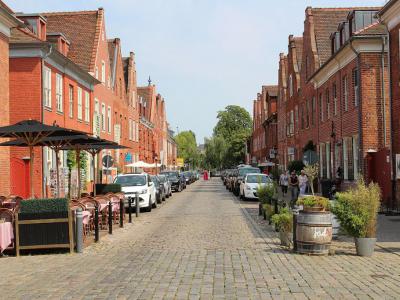 The Dutch Quarter is also known as Little Amsterdam. Frederick William I commissioned the district to attract skilled artisans from the Netherlands. Frederick William I intended to expand Potsdam but needed skilled labor to help, so he offered workers housing and work contracts. The king particularly sought masons, cabinet-makers, and goldsmiths.

The Dutch Quarter was built by Dutch architect Jan Bouman and completed in 1742. This unique area has four squares and 134 two-story houses. The houses weren’t all occupied by Dutch artisans as originally planned. Instead, however, they also housed Prussian and French artists, merchants, and soldiers.

The terraced houses feature red Dutch brick with white accents, shutters, and distinctive gables. This beautiful district only suffered minor damage during World War II, but time still took its toll, and the buildings fell into disrepair after the World War II. However, the area was restored during the 1970s and is now one of Potsdam’s main tourist attractions.

Jan Bouman’s home is considered one of Potsdam’s first urban houses and is open to the public as a museum. The home features a main house, half-timbered outbuildings, and a home garden. Inside, visitors will see a spinning wheel, furniture, and cooking implements from the 18th century.

The district features galleries, craft shops, and backyard pubs. Visitors can walk along the cobbled streets and enjoy shopping at charming boutiques. Visitors can also see the house Mozart lived in during 1789.

The Dutch Quarter hosts several festivals throughout the year, including the Tulip Festival. The Dutch Christmas market is another popular annual event.
Image Courtesy of Wikimedia and Liglioto.