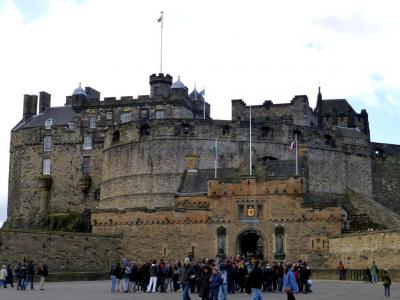 Edinburgh Castle has overlooked the city since the 12th century and is the second most visited building, after the Tower of London, in the United Kingdom. The very history of Scotland is deeply etched into its ancient stones.

The castle stands on top of Castle Rock, the basalt ventilation pipe of an extinct volcano eroded by glaciers. People have inhabited the site since the 9th century BC. The first castle was constructed by King David I of Scotland and it remained a royal residence until 1603.

As a fortress it was virtually impregnable, but it had one drawback: the basalt rock on which it stands doesn’t capture or hold water, so a 28-meter well was sunk, but in droughts or during long sieges, it dried out, and its denizens were then faced with either surrender or dying of thirst.

It was largely destroyed during the Lang Siege in 1573 and the only building from the 12th century still standing is St Margaret’s Chapel. In the 17th century, it became a military base and the garrison remained there until the 1920s. The few remaining members hold administrative or ceremonial posts.

Today the castle houses the Scottish National War Memorial, the National War Museum of Scotland and several smaller regimental museums. It is also the home of the One O’Clock Gun which is fired six days a week at precisely 1 PM and the city’s clocks are regulated by it.

In the Crown Room, you will see the Royal Scottish Crown, Scepter and Sword of State and actors in period costume re-enact important events of the castle’s history. In August the Edinburgh Military Tattoo takes place on the castle’s esplanade. In the north-east corner of the esplanade is a small iron fountain called the Witches’ Well. It marks the spot where many women were burned at the stake for witchcraft.

Why You Should Visit:
The views alone at the castle are some of the best in Scotland, and the walk up visiting all the little places makes it a really good experience.

Tip:
The entry is cheaper if you book online, and more importantly, you avoid the oftentimes long line.
Take free guided tour – they go every hour at least. Otherwise, the audio guide is £3 and is quite useful.
It could get windy, being at the top of the mountain, so definitely bring layers if visiting in cold weather.