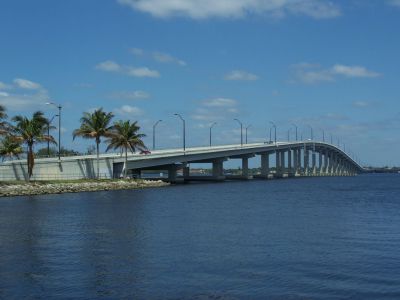 The Edison Bridge is a bridge located in Fort Myers. It is named after inventor Thomas Alva Edison, who was once a local Fort Myers resident, along with Henry Ford, founder of the Ford Motor Company. Both bridges are 55 feet tall.

The Edison Bridge consists of two separate three lane bridges, with one span carrying northbound traffic, and the other carrying southbound traffic. It carries U.S. 41 Business Route (with the hidden designation of State Road 739) over the Caloosahatchee River, connecting downtown Fort Myers (on the southern shore) with North Fort Myers. Despite carrying the same route, the two bridges are not parallel to each other. The two spans land at the same point on the north side of the river, but are separated by a few blocks on the south side. When looking on a map, the two spans and the south bank of the river form a right triangle. This is because Business Route U.S. 41 and S.R. 739 are carried on two separate one way streets in Downtown Fort Myers, with northbound traffic using Park Avenue, and southbound traffic traveling on Fowler Street.

The current northbound and southbound spans opened in 1992 and 1993 respectively. They replaced a small two lane drawbridge which opened on February 11, 1931. Thomas Edison dedicated the bridge, which opened on his 84th birthday. He was also in the first car that drove across the bridge after the ribbon-cutting. The drawbridge was located at the site of the current southbound bridge.

This sight is featured in a self-guided walking tour of Fort Myers, Florida within the mobile app "GPSmyCity: Walks in 1K+ Cities" which can be downloaded from iTunes App Store or Google Play. Please download the app to your mobile phone or tablet for travel directions for visiting this sight. The app turns your mobile device to a personal tour guide and it works offline, so no data plan is needed when traveling abroad.

Create Your Own Walk in Fort Myers

Creating your own self-guided walk in Fort Myers is easy and fun. Choose the city attractions that you want to see and a walk route map will be created just for you. You can even set your hotel as the start point of the walk.

The sunny city of Fort Myers has a number of different and interesting attractions to offer. Visitors taking this orientation walking tour will admire and learn about the oldest mansions and the most important federal buildings with architectural importance, as well as enjoy the sight of the splendid Caloosahatchee River with its yachts and grand bridge and take a rest on one of the benches in...  view more

Fort Myers is a very rich city in art venues like museums and galleries. Most of the galleries reflect the talents of artists from the city and its surroundings. The museums are true treasures for people who want to find out more about the traditions, culture and history of the region, as well as interesting facts about science and nature in general. By following this guided tour, you will have an...  view more