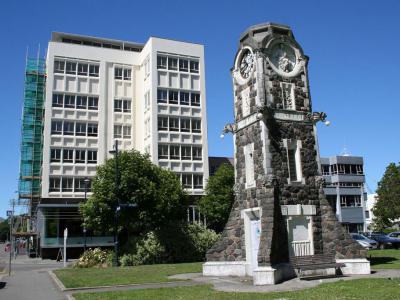 This clock tower on Madras Street was originally inspired by the older Diamond Jubilee Clock Tower, which are both listed attractions now. The Edmonds Tower was co-designed by a New Zealand sculptor, William Trethewey, and architect, H. Francis Willis. The foundation stone was laid in 1929. The tower is made of volcanic rock and limestone, shaped in a free style with a touch of Gothic. Each part of the tower reflects a certain theme: Charity, Faith, Hope, and Peace. The so-called Canterbury earthquakes have had their toll on the Edmonds Clock Tower causing it to crack at two levels and the top section to move. There is also moderate damage around the windows.
Image by mrsteve1_nz on Flickr under Creative Commons License.

Want to visit this sight? Check out these Self-Guided Walking Tours in Christchurch. Alternatively, you can download the mobile app "GPSmyCity: Walks in 1K+ Cities" from iTunes App Store or Google Play. The app turns your mobile device to a personal tour guide and it works offline, so no data plan is needed when traveling abroad.