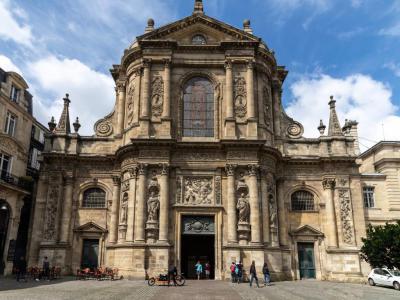 The Église Notre-Dame is an 11th-century Gothic church located at Rue Mably in the northern quarter of the city center. One of the city’s most popular buildings, its facade as well as its name bring to mind the more famous Notre Dame church, found in the center of Paris. Built by Pierre Duplessy, a renowned architect and town planner in the late 17th century, the church is a listed historical monument.

The church’s patron saint is St. Dominic; his figure is carved into the ornate facade of the building, receiving a rosary from the Virgin Mary. The church was founded after Dominican Catholics were moved from their convent in 1678, in order for King Louis XIV to expand his palace. Due to a dispute with neighboring buildings as they searched for free land in a growing city, the church was forced into building a place of worship that faced east rather than west.

The interior of the Église Notre-Dame is known for its ornate Gothic style decoration. The church holds regular mass, and visitors at any time will find locals and tourists alike kneeling in prayer in a building still known for its tranquility, despite consistently high tourist numbers.

Why You Should Visit:
The 19th-century paintings on the walls inside are interesting, the large organ and stained glass are quite impressive, but it is the façade, facing into a small, quiet square, that is the real star.

Tip:
Try to visit during the start of service – no one bothers you and you can stand at the side where the ancient baptismal fountain and chapels are.
Next door is the Cour Mably which used to be the cloister for Notre-Dame and is now a venue for temporary exhibitions but still worth a look, partly in its own right but also because you get a good view of the church tower from within the cloister.