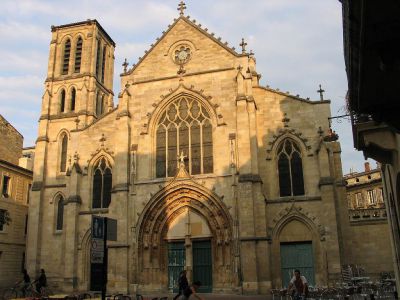 Église Saint-Pierre, or the Church of St. Peter, is a Medieval church situated in the heart of Old Bordeaux. Like many French churches from the 14th and 15th centuries, the Saint-Pierre is notable for its quirky, flamboyant Gothic architecture, particular an unusual single square bell tower on the left-hand side as you approach, giving the building a lopsided quality. The church’s interior is well known for drawing together architectural highlights from through the ages. An ornate Gothic portal stands next to a brilliant white 17th-century pieta, which illuminates the inner walls of the church.

The church is surrounded by an elegant square, the Place Saint-Pierre. Together they form the heart of this ancient district of Bordeaux, also named after St Peter. A bustling area of the city, from medieval times, it was largely destroyed in the 18th century. The narrow streets built in the medieval district’s place carry a timeless quality, each lined with similar, well-preserved townhouses. Look out for the peculiar faces on many of the house facades. Known as ‘mascarons’, they were a symbol of wealth for the homeowner.

Why You Should Visit:
Undeniably pretty with some unusual adornments externally. Also, as many have observed, it's very peaceful.
Sits in a shady, tranquil, small square that makes you feel you're in the middle of a small town rather than a busy city.

Opening Hours:
Daily: 8am-6pm, except Sundays when services are held between 8am and 12pm.
Image by Luidger on Wikimedia under Creative Commons License.
Sight description based on wikipedia