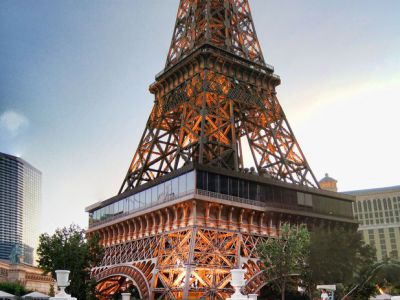 The half-scale replica of the Eiffel Tower is arguably one of the most romantic places in Las Vegas. Just like its real life prototype in the French capital, the Tower is a key element of the Paris Las Vegas Hotel, which is themed on the city of Paris.

Among other features the Tower includes an observation deck situated 540 feet above ground level that offers a breathtaking view of the city. The property is owned and operated by Caesars Entertainment Corporation. Initial plans for the Eiffel Tower called for a full-sized replica, however, given the proximity of Harry Reid International Airport, this would have interfered with air traffic, and so the designers opted to curtail it to a “mere” 164.6 meters.

Paris Las Vegas opened on September 1, 1999, with fireworks being shot from the Eiffel Tower. A unique architectural aspect of the complex is that the back legs of the Tower actually go through the ceiling to the casino floor, where French wrought-iron streetlamps grace the large room and the ceiling is painted to represent the sky.

The Tower is home to the notable Eiffel Tower Restaurant, and the Eiffel Tower Experience within the hotel is a signature attraction in its own right.

Since its launch, the Tower has made several appearances in films and TV productions, including: the 2006 miniseries 10.5: Apocalypse; the 2007 film Resident Evil: Extinction, Paris; the 2010 animated film Despicable Me; the 2014 film Godzilla; and in the post-credits scene of 2018's Jurassic World: Fallen Kingdom.

Why You Should Visit:
To get a glimpse of Paris’ grandeur, plus to enjoy some of the most wonderful and truly unforgettable views of the Las Vegas Strip.

Tip:
Visiting the top can be challenging for those who have fear of heights.
To get photos showing the height of the site, try to put your camera over the little holes in the floor.
When dining at the Eiffel Tower restaurant, ask the management whether you can go up, and if you’re lucky you may get free tickets.
Image Courtesy of Flickr and Serge Melki.
Sight description based on Wikipedia.