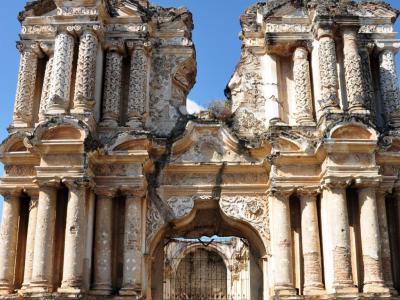 With its ornate stonework and majestic columns, El Carmen was a lavish Catholic church in the city of Santiago de los Caballeros de Guatemala that survived relatively well the Santa Marta earthquakes but was almost destroyed by ulterior 20th-century ones. Despite this, the facade remained in rather good condition and has since then been admired as an example of the Guatemalan seismic Baroque.

No longer active, the church can only be viewed from the outside (try peering through the bars used to protect it), but that gives you time to enjoy the popular handicrafts market right next door; an excellent place to buy gifts for your loved ones, though sometimes you have to know how to bargain if you want to pay a good price.

Tip:
Also across the street is the excellent EPICURE restaurant inspired by European cuisine, and next to it is the amazing home that Antoine de Saint-Exupéry lived in when he wrote 'The Little Prince'. If you crave a vegetarian/vegan meal, do not miss LA BRUJA, tucked into the back corner of an off-street courtyard surrounded by plants. The food is simply amazing!
Image Courtesy of Wikimedia and chensiyuan.