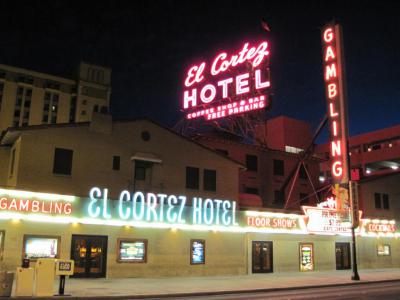 Opened on November 7, 1941, El Cortez is one of the oldest casino-hotel properties in Las Vegas that is still operating. This relatively small downtown gaming venue features slots, table games, and a race and sports book.

Located just a block from the Fremont Street Experience and Las Vegas Boulevard, back in the day, it was considered too far from downtown. However, it quickly gained profit so much so, in fact, that the notorious mobsters Bugsy Siegel, Meyer Lansky, Gus Greenbaum and Moe Sedway rushed to buy it in 1945 for $600,000. El Cortez is also the place where Siegel learned the ropes of running a casino business himself.

Decades in operation, El Cortez is still thriving. Primarily Spanish Colonial Revival in style, the building reflects a 1952 remodel when the facade was modernized. Upon further renovation and revival, the place got a new tower and a new sign that uses neon – a classic Vegas art form that had fallen out of favor until a recent rediscovery by some hotels and businesses.

On February 22, 2013, the structure was placed on the National Register of Historic Places.
Image Courtesy of Wikimedia and kl91711.
Sight description based on Wikipedia.