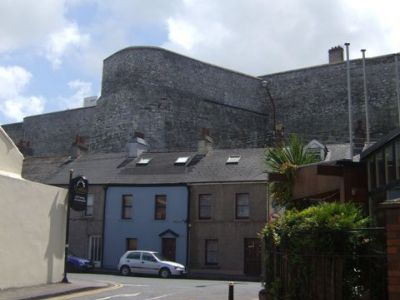 Elizabeth Fort is a 17th-century fort near the center of Cork. It was built in 1601 by Sir George Carew. The fort was named after Queen Elizabeth I. The fort was demolished in 1603 but later rebuilt. Most of the existing fort was built between 1624 and 1626.

The fort was originally built on high-ground outside the city. When the city grew, it encompassed the fort. After that time it was used as military barracks, a prison and a police station. It now functions as a tourist site.

As a tourist site, Elizabeth Fort is open to the public. It is also a venue for festivals and public events. Some of the events held at Elizabeth Fort include the Cork Midsummer Festival, Cork Heritage Open Day, the Cork St. Patrick's Festival, Culture Night and Heritage Week.

Elizabeth Fort is open Tuesday through Saturday from 10 AM to 5 PM and Sunday from noon to 5 PM. There is no charge to tour the fort.
Image Courtesy of Wikimedia and John M.