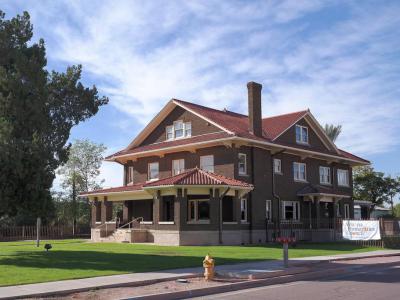 At one time, North Central Avenue was knowns as "Millionaires' Row" because of the mansions that lined it. The only surviving and unaltered mansion is the Ellis-Shackelford House, which was first built by Dr. Ellis. Ellis was the chief of the medical staff at the Arizona Deaconess Hospital, now Good Samaritan. Ellis's daughter and her husband, J. Gordon Shackelford, lived in the house until 1964. It's now owned by the city and is home to the Arizona Humanities. It's available for special events.

The house was built in 1917 by architect R.A. Gray. It has three stories plus a basement and features many beautiful touches. There are hand-painted globe chandeliers, wire-cut bricks from Colorado, and wood trim from imported Filipino mahogany. The designer used the familiar Midwest Prairie Style, but with lots of Mediterranean detailing. The house features a Porte-Cochere, a covered entrance for vehicles on the southeast side. It fit the Model-Ts and carriages of the day, but later cars became too wide. The house also features an original 1917 model Night and Day Solar Water Heater and a central vacuum system.

This part of town was used to boost Phoenix's image by town planners, who used the City Beautiful movement. They focused on broad sidewalks with shade trees to contrast with crowded cities out East.
Image Courtesy of Wikimedia and Visitor7.