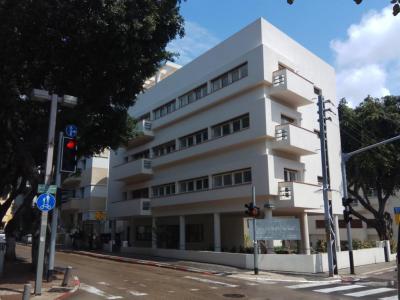 At Rothschild 84, the large residential Engel House, designed in 1933 by prolific architect Ze'ev Rechter, is mainly remembered by the public as "the building that put Tel Aviv up on pillars", allowing for better ventilation (through the shaded area) as well as for visual contact between the boulevard and the courtyard – thus giving the illusion of additional space within a densely populated city.

Inspired by Bauhaus/Modernist designs but adapted to the environment, the U-shaped building has protruding window frames to create shade – a substitute for the wide windows favored in Europe, which are unsuitable to Israel's climate. On the other hand, the roof – originally a communal space – once had a nice solarium and a gym, thus illustrating Le Corbusier's concept of the 'roof terrace'.

Having gotten frayed in the Mediterranean sun for many years, Engel House is finally back to its heyday, following a long and meticulous restoration.
Image Courtesy of Wikimedia and Avi1111 dr. avishai teicher.