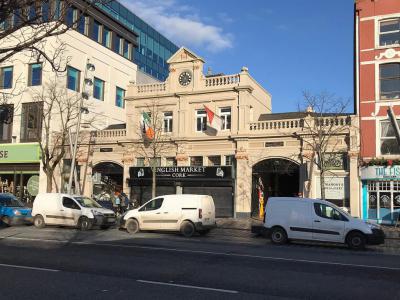 The English Market is a municipal food market in the center of Cork city, Ireland. It stretches from Princes Street to the Grand Parade, and combines Princes Street Market and Grand Parade Market. The market is regarded for both its mid-19th century architecture and locally produced artisan food.

The market has become a tourist attraction, has developed an international reputation, and has been described by chef Rick Stein as the "best covered market in the UK and Ireland".

The term English Market was coined in the 19th century to distinguish the market from the nearby St. Peter's Market, which was known as the Irish Market. There has been a market on the present site since 1788 when it was opened as a meat shambles and known as "new markets".

Today the market centres around a cast iron fountain, and is typically entered via either a tripartite facade on Princes Street, or a bayed entrance from the Grand Parade. The market is known for its interior; which consists of a gabled central bay, central archways, and stained glass lunette windows.

A variety of different fresh produce from around the world can be bought in the English market. The market is still best known however for its fresh fish and butchers, and it serves many of the city's top restaurants. It is a source of local specialities such as drisheen, spiced beef, and buttered eggs.

Queen Elizabeth II visited the market during her 2011 state visit to Ireland as did Charles, Prince of Wales during his visit in 2018. Both were served by fishmonger Pat O'Connell. In 2016 and 2017, the English Market was used as a location for the film The Young Offenders and the subsequent TV series of the same name.

Why You Should Visit:
Clean and charming old-fashioned market with a wide choice of top quality Irish food. Ideal for local self-catering, but also for some quick sampling.