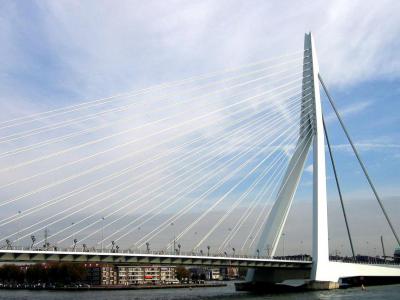 The Erasmusbrug ("Erasmus Bridge") is a famous bridge made of cable-stayed across the Nieuwe Maas river, connecting the northern and southern parts of the city of Rotterdam. It was designed by Ben van Berkel and completed in 1996. The bascule bridge is the largest and heaviest in West Europe and has the largest panel of its type in the world. The structure is called "the Swan" by locals because of its graceful posture over the water. The southern span of the bridge has an 89-metre-long (292 ft) bascule bridge for ships that cannot pass under the bridge. After costing more than 163 million euros to construct, the bridge was officially opened by Queen Beatrix on September 6, 1996. Shortly after the bridge opened to traffic in October 1996, it was discovered that the bridge would swing under particularly strong wind conditions. To reduce the trembling, stronger shock dampers were installed.

Why You Should Visit:
To admire one of the most beautiful bridges anywhere – a triumph of design.
Great crossing whether by bike or on foot. Also, you can take some nice pics of the city, with Maas river and the new skyline of Kop van Zuid.

Tip:
Worth seeing both during the day & after-dark due to a completely different look.
Image by Christian Richters on Wikimedia under Creative Commons License.
Sight description based on wikipedia

The name Stadsdriehoek refers to the historic City Triangle of Rotterdam, which dates from the late Middle Ages. The area was bounded by Cool Vest and Schiedamsevest to the west, the Golden Vest to the northeast and the Nieuwe Maas to the south. Take our tour to see the top sights in this beautiful area.

Holland's major port, Rotterdam is an attraction in its own right, totally rebuilt after WWII, hence featuring bold, modern architecture, sometimes as peculiar as the world-famous Cubic Houses. The local Maritime Museum, displaying vintage ships and exhibits, attests to the city's great seafaring past. To get to know Rotterdam in its variety, follow this orientation walk and explore the...  view more